We started our 1350 km long drive towards Dortmund in Germany at 7 in the morning. We, was my travellingcompanion Sari Karlsson, myself and 6 dogs. Sari had her Cindy - Manaca's Rhyme and Reason and I had her sister Ingrid - Manaca's Rags to Riches, Maggie - Manaca's Pull No Punches, Josofin - Ch Manaca's Bag of Beans, Johnny - Charbonnel Manacas Design and Folke - Manaca's Gets Ideas Going.
Our drive went on smoothly only with short stops along the way, until we got halfway through Germany and we got stuck for more than 3 hours in a traffic jam, not fun at all when you've been driving for so long and just longed for the bed at the hotel.... 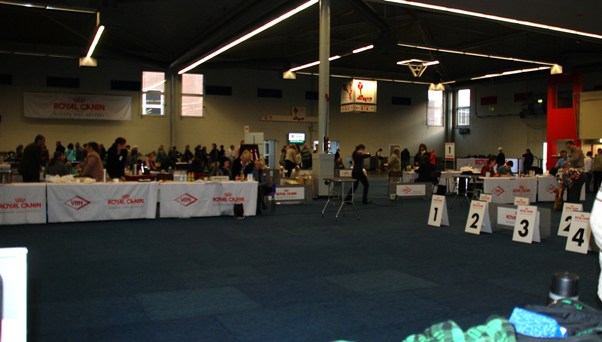 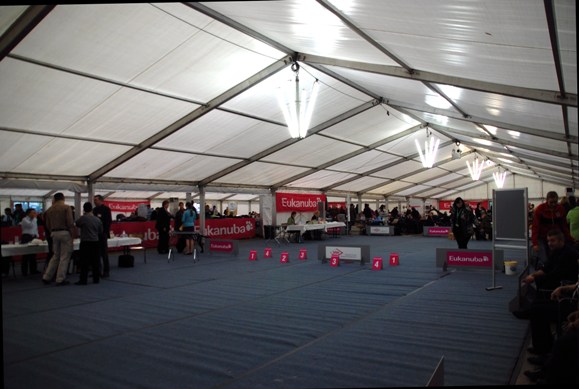 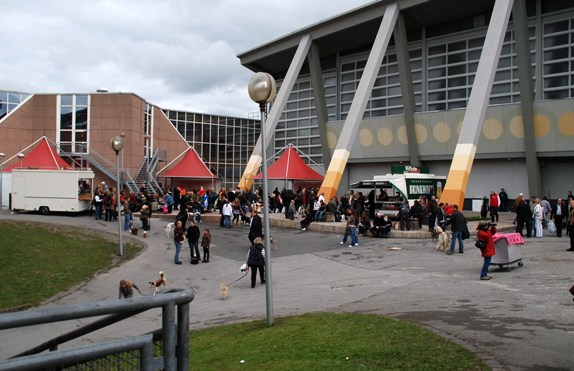 Let me explain a bit about the showregulations as I understod them: The Bundessiger show is Germanys biggest show with over 10 000 visitors over 3 days. The Bundessieger title goes to best bitch and best dog in every breed and the title qualifies the dog to enter in championclass even if it's not yet a champion! The classwinner in it's class wins a VDH CAC (which can give a VDH championtitle) which at this Bundessieger show counts as 2, and the second placed gets a reserve VDH CAC which at this show counted as 1 VDH CAC! The classes are also devided in solids and particoloured. This year the show was also a Cruft's q 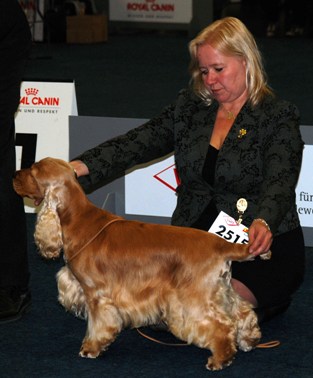 ualifier. The juniorbitches and males from all colourclasses compete for the juniorCAC and the veterans compete for the veteran CAC. The intermediate, open and championclasswinners compete for the CACIB and then the winner from those compete with the junior and the veteran for the Club CAC (which can give a German show championtitle).
The show halls were many and huge and the rings were covered with mats, something we are not spoiled with in Sweden. We are lucky if there is one mat diagonally across the ring. On our first day we were in one of the halls and the next in a huge tent which was also very nice.  There was so much shopping to be done (in comparison to Cruft's actually!) and everything could'nt be seen in just one day. I was even impressed by the huge place to get the dogs "out for a wee and a pee"! There was a  beer tent to relax by and a place to get some nibbles, if you felt like it, so nice!! This we DON'T have at shows in Sweden!! ;-)

We paniced a bit as I discovered that I left all papers for the show at home in Sweden!!! Thank god for good friends in Germany, thanks for all the help Karin, we would have been totally lost without you!
They started with puppies and Manaca's Dear Prudence had come all the way from Italy. She won her class and was best puppy, congrats to her owner Liana Pacco and thanks for the huge gift, I'm still enjoying it!! ;-)

Next was the veterans and after the solid champion class were Folke - Ch Manaca's Gets Ideas Going was entered. He came in second after the male who later became BOB so I was pleased with that. At this show the reserve VDH CAC counted as one so Folke got his first VDH CAC! He so much enjoyed to be out in the rings again, it's been awhile! >>>

Next was Johnny - Charbonnel Manacas Design in solid open class. I can always count on Johnny to perform in the ring and so he did this time, he won the class and got 2 VDH CAC's!! Here Johnny is beeing examined by the judge, Mrs Helle Dan-Pålsson and the next photo shows his class, a very nice one. What I'm waving at, at the photo I don't know... 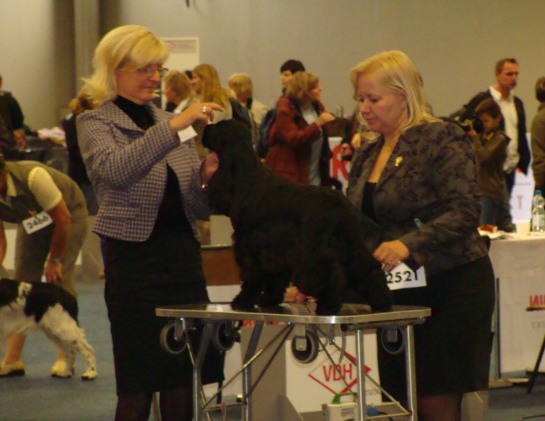 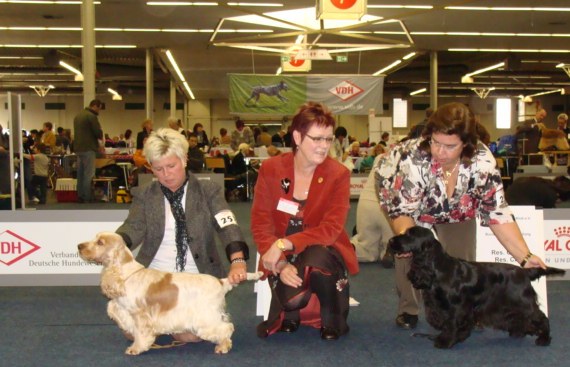 Over to the next ring were the bitches were judged by Mrs Paula HeikkinenLehkonen. First all the solid bitches and we had one with us, Saris Cindy - Manaca's Rhyme and Reason who came in second in her class and thereby got a VDH CAC!

After all solids the it was th 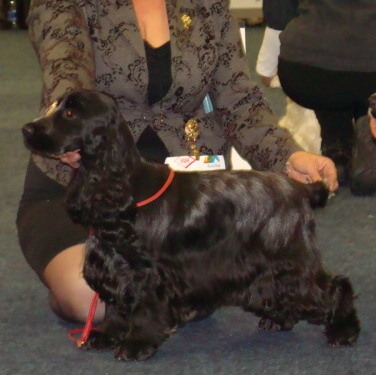 e particoloured and first in of ours was Josofin in championclass. Josofin is in topcondition right now her litter of pups some months ago. She won the class and got 2 VDH CAC's! She then went on to winning the CACIB and getting best bitchwith the club CAC, handled to that by Sari, thanks my friend!

<< Ingrid was next in intermediate class which she won with 2 VDH CAC's closely followed by Manaca's Pay Per View who came from Italy for the Bundessiegershow and now got 1 VDH CAC. She is littersister to Maggie who was entered in the next class, the open class, so it was a bit strange to have her in Ingrids class! Her owner Roberto by the way won BOB with their Clumber spaniel, huge congrats to that too!!

And last in (but not least) was Maggie - Manaca's Pull No Punches in open class. She also won her class and got 2 VDH CAC's!! I realized when I got home that Maggie was'nt in one photo from the trip, shame on me! You can take a look at her on her own page instead....

So to the best of breed final... here Josofin gets closely examined by the males judge, Helle Dan-Pålsson ... and gets to move, which she just loves! 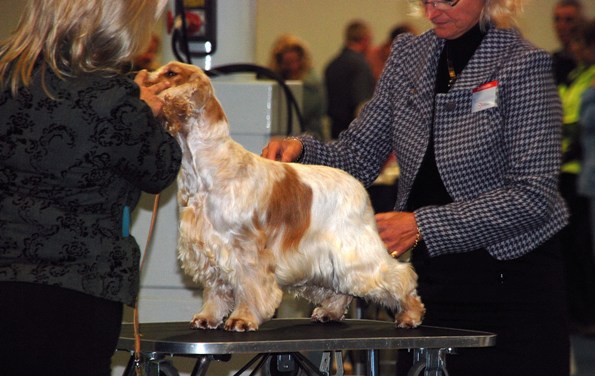 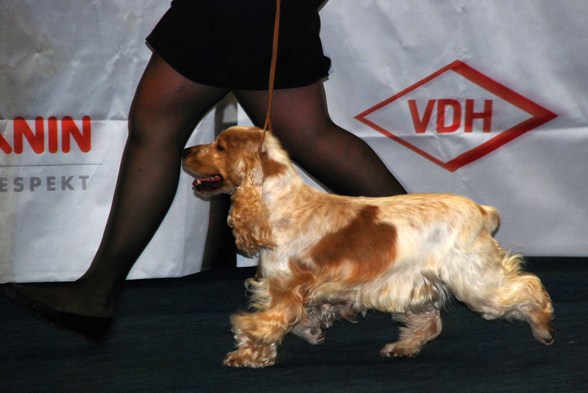 This day the BOB went to the dog. A champion dog from Denmark, he's name is Natisja's Adonis and owner is Per Willumsen. He was later second in the group, huge congrats Per! This 13 year old boy is still looking good! Both Josofin and the male got their Bundessieger titles and are qualified for Cruft's! 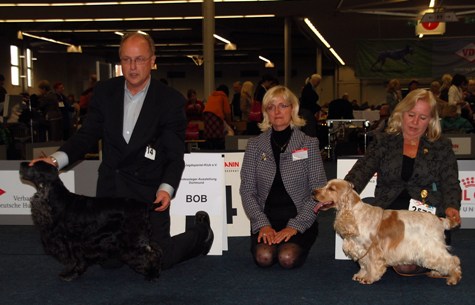 I guess both me and Sari needed our sleep after the long drive and a long day at the show, so after some wine and some crisps we went to bed like old ladies already at 9 pm! and slept like babies through the night.

Day 2, the national show.
New day, and some problems finding a parkingspace as there was a Bundesliga footballmatch in the hall towards ours. I have never seen so many policeofficers at one place! Getting out from the place later on was also a challenge, with lots of roads closed off, thank good for my GPS!!

This day our ring was in this huge tent (photo above), and there was'nt that much space around the ring as the day before, but so much cosier! ;-) This day the judging was done in one ring and started with the dogs judged by Mr Peter Bayersdorf.
First in again was Folke - Ch Manaca's Gets Ideas Going who again was second in his class, but as the winner already is a VDH champion the CAC goes to Folke anyway, so he got his second VDH CAC! 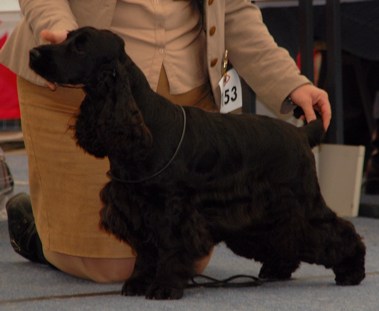 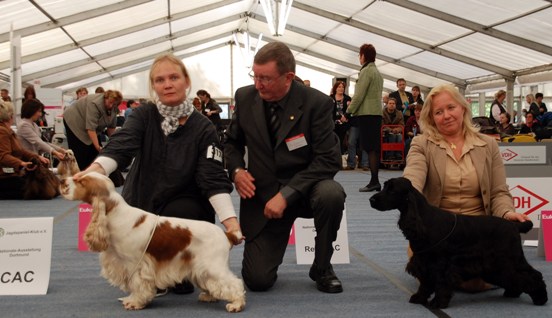 When the dogs were finished there was a change of judges in the ring and Mrs Helle Dan Pålsson came in to judge the bitches. First out again was the solid bitches and Cindy - Manaca's Rhyme and Reason today won her class and got her second VDH CAC! Cindy is littersister to Timmy and Ingrid, so theese littermates were having a successful weekend! 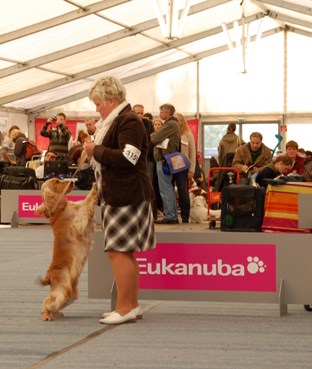 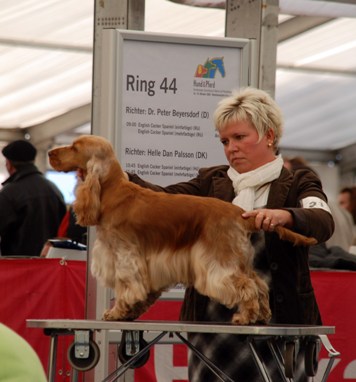 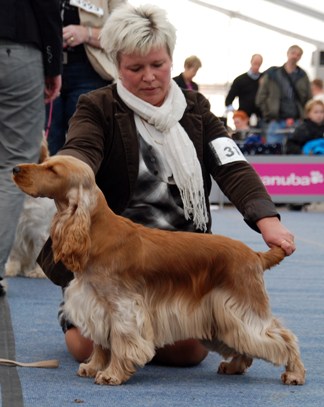 Next in was Ingrid who again won her class and got her 3:rd VDH CAC! She then went all the way and was best bitch with the club CAC! Reserve best bitch was Kraglund's Go On little Arniedaughter, a daughter to our Quettadene Lancelot! 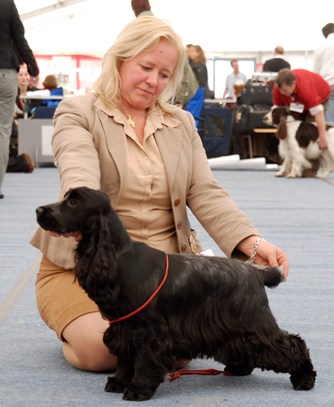 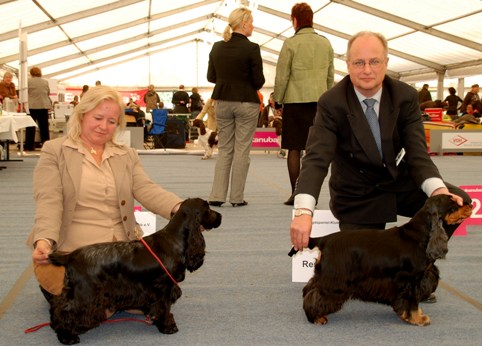 And sweet little Maggie - Manaca's Pull No Punches also won her class again and got her 3:rd VDH CAC! Here is a photo of the best bitch final where 4 out of 6 bitches was Manaca's bitches!! There's Maggie at the end of the line by the way... thanks to Kristine and Sandra for handlerhelp!

After the bitches the dogs judge came in to judge best of breed. So the judge had to decide between brother or sister for BOB! But the dog of this day was Timmy - Manaca's Rough and Ready who not only went BOB, but also won the group under Mr Hans Müller and then went BIS-2!! Huge congratulations Kristine, way to go Timmy!! 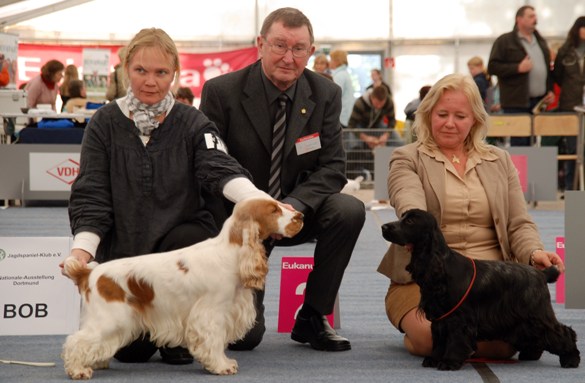 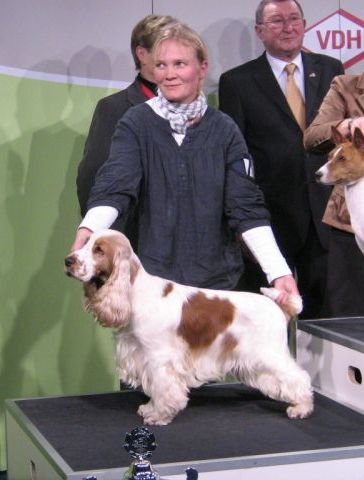