"Stanley" is a Swedish show Champion, he has several BOB´s, BOS´s and BIS placements, he was awarded Swedish Winner-99, runner up for "Cocker of the year"-99, top winning solid-99.
Stanley was with me at the World Dog show in Milan in the summer of 2000 where he was placed as fourth best open male (amongst 28), the only placed with undocked tail! 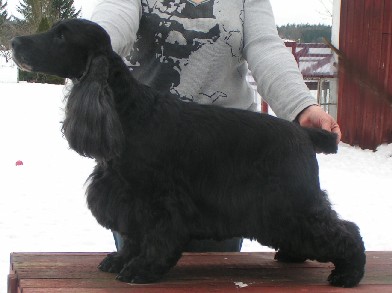 Stanley has now turned 9 years and is competing with honors in veteranclass!!

Stanley´s hips & eyes are OK. Stanley is owned by Mrs Yvette Widenor.
You can read moore about him at http://www.ywidenor.se