It runs in the family!!
PRESENTING GENERATIONS OF GROUPWINNERS:

AND THEY KEEP WELL UP IN AGE...
Father & daughter: 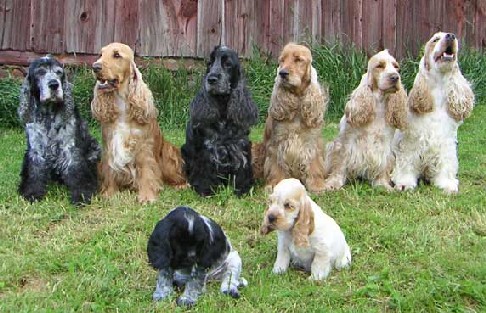 photo: Karoloine Djerf.
Here you can see Signe with several of her children and mother and grandmother.
from the left: grandmother - Manaca's Chain Reaction (almost 14 years), daughter Stella - Manaca's Of Course, mother Hedvig - Ch Manaca's Alice in Chains, Signe herself - Ch Manaca's In Your Dream, daughter Gun - Ch Manaca's Oops I Did it Again, son Otto - Ch Manaca's On the Road and in the front is 2 of the youngest babies, Manaca's Absent Minded Artist & Manaca's Artist at Plainfire's 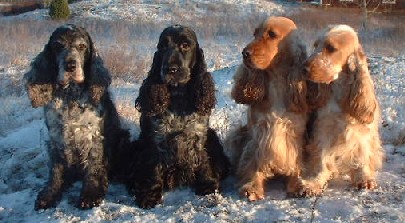 All theese girls has been so very alike in their temperament and ways. In their youth they all had a tendensy to taste at all our shoes, slippers, socks, showprices and so on... and all of them stopped the behaviour after the first time in heat.
They are all very calm individuals and just like to enjoy life, and they´re all very easy to learn.
Now we´re expecting the fifth generation of this line, so we have to pack away all our shoes, slippers and so on once again. 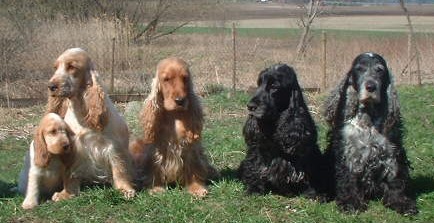 Here is 5 generations Manaca's bitches in a straight line. (April 2004)
The photo is taken just before Tosca left home for the south of Sweden.
(I'm sure we will here stories about missing slippers and shoes....) 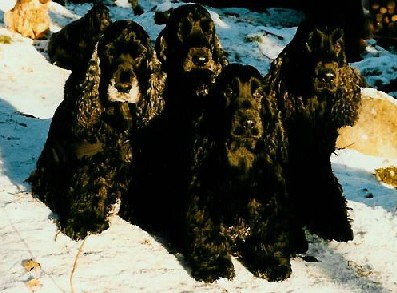 In this generation you can see such similarities in temperaments. They all have perfectly clear signals with other dogs.  They all go fetch, everything you throw and they all have a great passion for water....

In this line, the tendensy for allways putting the feet in the water while they are drinking ( especially when it´s hot outside), has followed....