Thanks to Anna Johansson and Anneli Sundqvist for some of the photos!

At 2 pm on march 5, we started our drive to Rotterdam and the ferry to take us over to Hull in England.  With me on the trip this time was the twolegged  Karoline Djerf and Yvette Widenor. The fourleged was Colin - Ch Manaca's Beat About the Bush, Folke - Ch Manaca's Gets Ideas Going and Josofin - Ch Manaca's Bag of Beans. When the expectations are at the top for an adventure like this you do have more strength than you thought possible. So I drove the 17 hours to the ferry in Rotterdam just like that! And exactly like last year everything went smoothly with the checkin of the dogs, even though all the papers were checked rigorlously.

When we got of the ferry in Hull we only had about an hour drive to the place we were staying this time.  Sandra & Roger Williams, kennel Wilmerella, had kindly offered us to stay at their house during our stay. It's to this home Liliann - Manaca's Laid Out in Lavender mooved in april when her vaccinationscheme was finished. I ad the opportunity to check out how she she was going to live, and I was not disappointed! She will live in a house with a beautiful garden and with marvellous open fields to go on long walks together with the other Wilmerellas.Thursday was spent to give all the dogs a  bath and some last finishing touches. In the afternoon Jane Pop with Simon - Ch Manaca's High On the Hog, joined us and he got a Swedish trim after a long time in England ;-)

And then D-DAY....early morning and 1½ hour drive to the NEC hall in Birmingham. As our benches were placed a long way from ringside we jus took our things and mooved them closer to some empty benches we found. Lucky enough theese benches were just beside Sandy Platts dogs and of course also my dear Sonja - Ch Manaca's Undesingned Dream, who was going to come back with me after the show, finally!! Well, before that she was going into open class together with Sandy for a last time, were also Josofin was entered.

The judging in the dogs ring satrted ½ hour before the bitches since there were so many more dogs entered. Sue Young, kennel Canyonn was judging the dogs and David Shields, kennel Wilholme was judging the bitches. About 400 Cockrers entered. Folke was first of ours in the ring, and it started good, Folke was placed 4:th in a very tuff class!! The winner for ex in this class was the dog that eventually ended up as best dog with CC - Chavez Royal Liasion, a super black male. 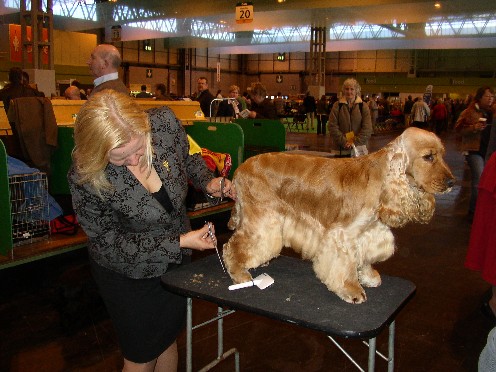 Finishing touches before entering the ring, mostly to calm my nervs to be totally honest... 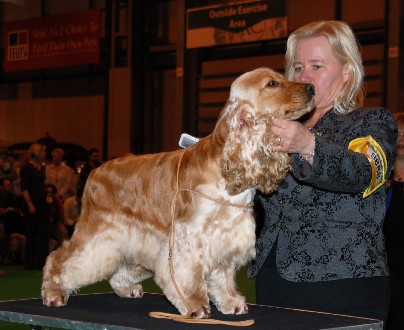 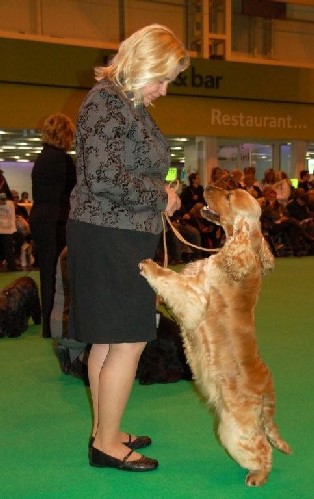 Here I am, fixing Folke up on the "judgingside" while the judge is finishing with the one beore me... that's what I thought! She was a bit quicker than I counted on so I had to be told by people around - very embarrassing! But.. the judge took it in a good way, propably understod that nervs was in the picture.. ;-)) 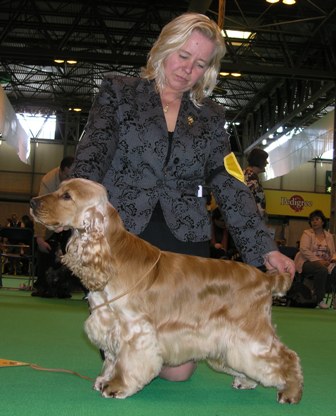 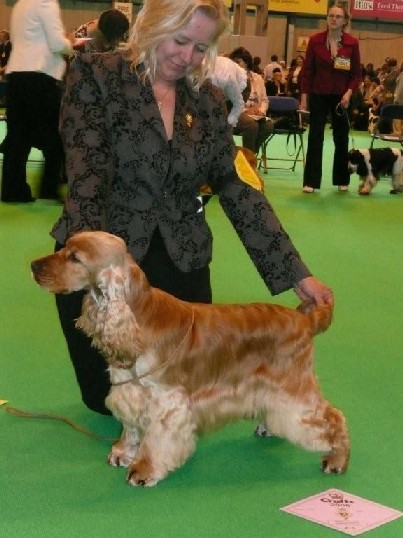 Next one's in the ring was Sonja and Josofin in the other ring. They were in the openclass wich could be compared to our championclass, as they don't have that in England. Sonja were to be shown by Sandy for the last time and she was really in tiptopcondition! In the first cut both Sonja and Josofin were picked out, just guess if there was one proud breeder in the ring at that moment? Josofin did'nt get placed in the end, but we were pleased anyway as her coat was'nt in the best condition, thinking that she had her first litter only a few months before. 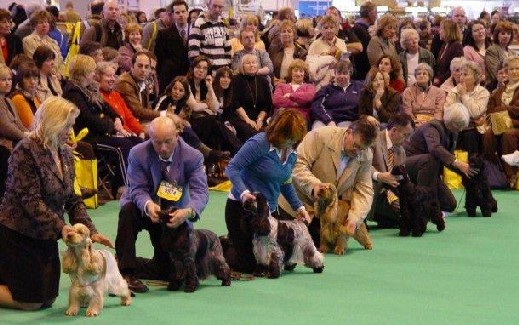 Here are some of the bitches in openclass in the first cut.  Josåfin first, 3:rd fr. right the Danish bitch Ch Cockergold Cute n'Vital (Josofins halfsister) who was placed second in the class, congratulations to  Lotte and Michael! Second from last is Ch Dillonpark Ambrogina who won the class. She is owned by Mr Michael Parkinson and was the winner last year at Cruft's. She's also Englands top winning Cocker right now. Last is Sonja who got a 5:th place and VHC (Very Highly Recommended). 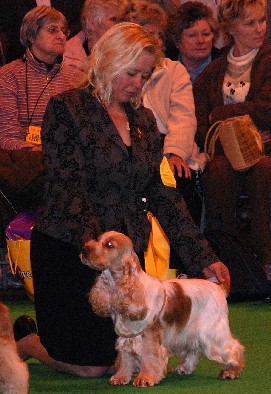 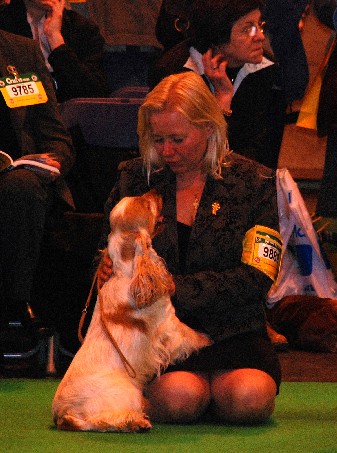 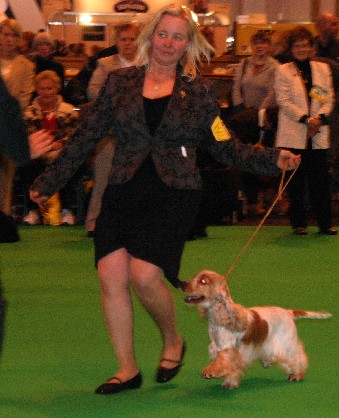 Josofin and me in full concentration at Cruft's 2008. While waiting in the ring (You're NOT allowed to go out of the ring) we took our time to cuddle and rest a bit... many were impressed by Josofins lovely happy moves, thanks all for that! 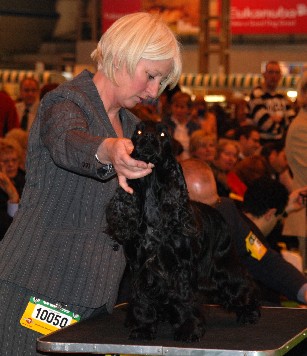 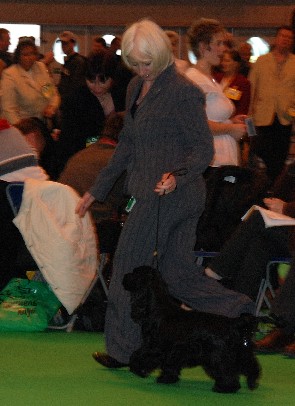 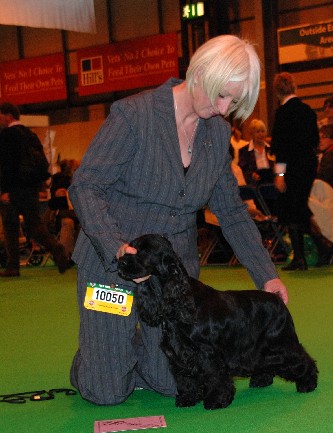 Sonja was shown by Sandy Platt for the last time. After 6 months together she and Sonja had really bonded and Sonja showed herself at her very best, wich resulted in a fifth place in a very tuff competition, an honorable ending of her time in England, don't you think!?

Now only Colin and Simon to go... when openclass was one of the last classes they did'nt enter the ring until late afternoon and by that time both breeder and owner was quite nervous, as there were some excellent dogs entered in this class.
On the photo below you can see some of the dogs in the class, all English championdogs... and also some of the spectators around the ring, it was packed! Since the bitches were finished by now everyone had moved to the dogs ring.  3:rd from right is ShCh Lindridge .... who was pointed top stud dog in England 2007. With the front to the camera is ShCh Manchela Party Trick who ended up as winner of the class and got the reserve CC! 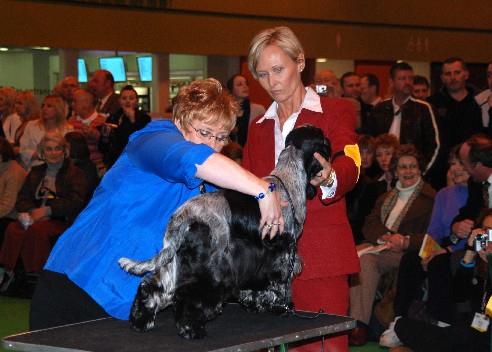 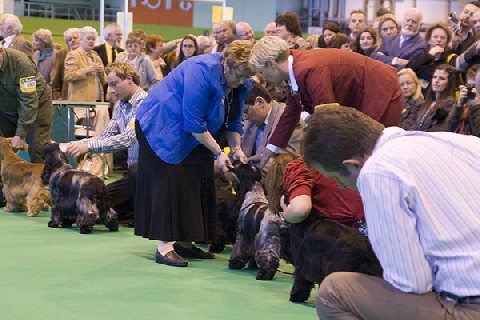 Here Colin gets examined bu the judge. And oh yes... Yvette made the same mistaka as I did, stod with her back to the judge when she was trying to see the dog:-)) It was a bit nervwrecking when the judge went to see Colin several times... 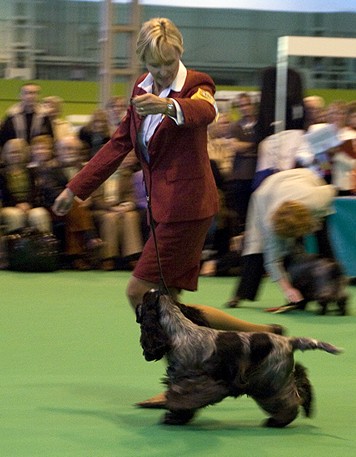 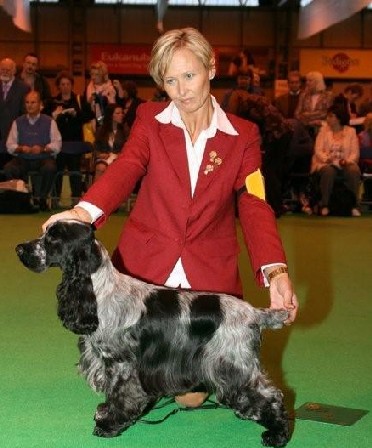 As allways Colin loves to show off in the ring and really enjoys himself . This time the reward was a 4:th place! 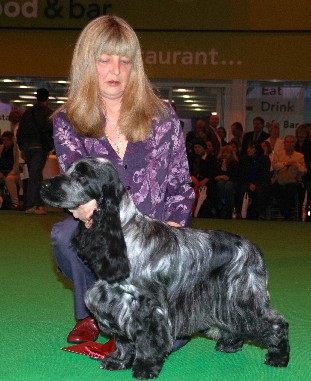 Last out of the Manaca's dogs was Simon with a very nervous Jane holding the lead. He was entered in special working class wich he is qualified for by his tracking champion title.

Well, Jane did'nt have to worry at all... as allways you can count on Simon on the move wich is his very strongest quality. He won the class and got a splendid critique, that I read in the Dog World just some weeks ago. That's how it's done in England, you have to wait for the critics for the first 2 placed in every class in Dog World some weeks after the show. 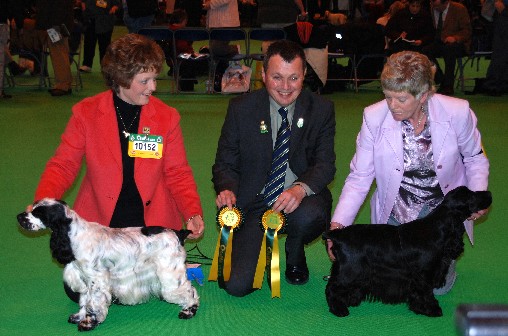 The bitches battle ended with the winner from graduate bitch, the black Asquanne's Ginelle was best bitch with CC. She is owned by her breeder Mrs Anne Webster and she was also BOB and ended up as BOG-2 under Mrs Patsy Hollings!
The bitches reserve CC went to the black & white Ryallcourt I-Ce Pie from under graduate class, owner Mrs Phyllis Wisehead. Best puppybitch was the red Canigou Tail Me A Story, who also was best puppy, owner and breeder is Mrs Bentley. Unfortunately no photo of her. 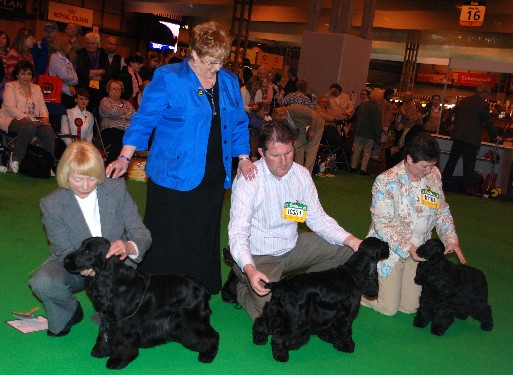 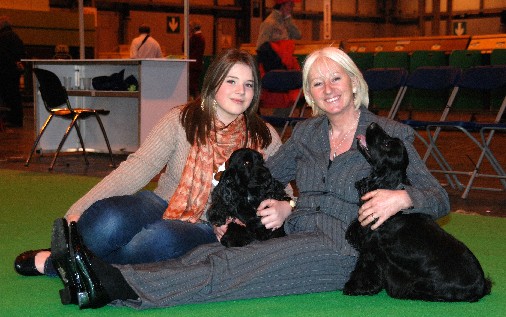 After the judging was over Hannah and Sandy took some time to say goodbye to Sonja.. wich was a bit more sad after the photoshoot...